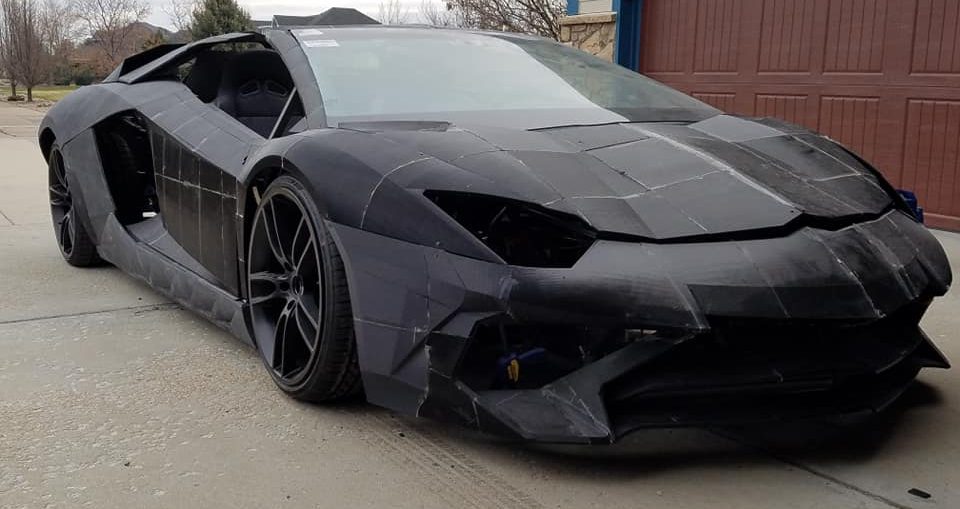 Sterling Backus’s son only had one question after he drove a Lamborghini Aventador in the XBOX video game Forza: Can we build one? Most dads would respond with a chuckle and some quip about winning the lottery. But not Backus, whose day job is laser physicist. Backus responded, “Sure,” and he meant it. As of this week, the replica is capable of driving under its own power.

Backus, the chief scientific officer at KMLabs in Boulder, Colorado, and his 11-year-old son dubbed the project “Interceptor,” and the build has a budget of about $20,000. Backus hand-built the steel chassis and pulled an LS1 V8 from a Corvette for power. He found the panel layouts through online design community GrabCAD, and then he modified them for 3D printing.

But he ran into a problem: The 3D-printed plastic would melt in the sun. So, he decided to incorporate carbon-fiber encapsulation (shown below), in which he wraps the parts and covers them in epoxy. Piece by piece, he assembled the shape of the supercar using a Creality CR-10 105 desktop 3D printer that he got for about $900 from Amazon. The front brake air intake alone is said to have taken 52 hours to complete. Additional cool features include a gated shifter, functioning lights, and scissor doors.

One of the fun aspects of the whole story is that Backus admits he had some learning to do when it came to the art form of additive engineering. So, he turned to the same place everybody else goes these days: YouTube. The physicist joked that he went to YouTube University and learned by watching videos.

With the end of the project in sight, Backus says he wants the final product to serve as an educational tool for Science Technology, Engineering, Art, and Mathematics (STEAM) programs.

“The intent is to take the car to local schools to show kids how cool technology can be,” the project’s Facebook page says.

In the words of Jesse Pinkman, “YEAH SCIENCE!”