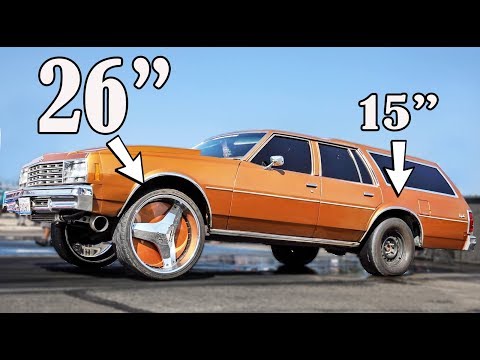 This was not something you would expect to see while driving through the pits of Hot Rod’s Drag Week 2017, and for obvious reasons it caught tgese guys very off guard! Alan Robinson had alternative plans for a Drag Week car, but when he realized it would be done in time he switched gears to the car he should have planned on bringing all along!

This Monsterous Chevrolet Impala Wagon is sportin’ 26” Blades on all four corners on the street, but due to the fact they weigh 98LBS each, only two are traded out for Drag Radials on the track which leaves a unique sight to see! Weighing in at 4720lbs with the wheels and stereo system, this big body chevy is truly impressive to see running passes in the 11 Second range! It may not have been everyones top pick, but we LOVE seeing unique cars wherever we can and we can’t wait to see what Alan brings to Drag Week next year!