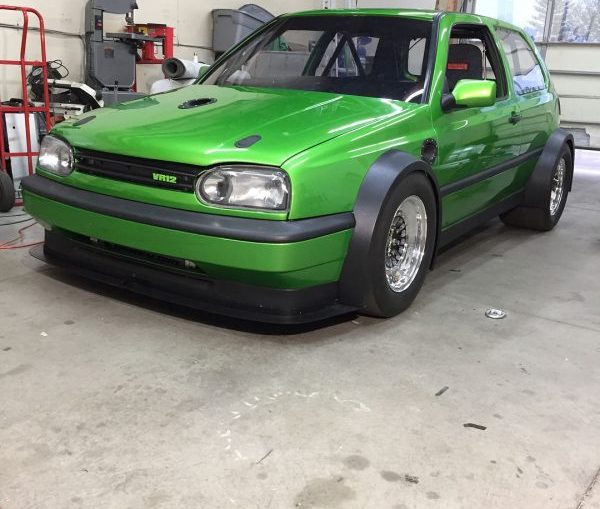 Here we have another badass project! On the front and back of this Golf Mk3 is a badge that says VR12. That’s because this Golf has not only one VR6 in the front but also one VR6 in the back! Each engine features a SP Stage 3 block, SCCH ported 12V heads, bigger valves, titanium retainers, solid lifters, TT 288 solid cams, and Garrett Gen2 GTX3584RS turbocharger!

The combination is capable of 2,000 horsepower in total! Dual drive-by-wire switches allow either both engines or a single engine to be controlled with the accelerator pedal. The drivetrain consists of a Clutch Masters 850 series twin disc clutch, 02M FSR transmission with upgraded gears, Peloquin differential, and Driveshaft shop Stage 5 axles going to 17-inch Hoosier slicks. The car went low-9’s several times in 2017 (9.142 sec at 163.81 mph, 9.136 sec at 162.22 mph) however the owner is hoping some recent changes will get it into the 8’s in 2018!

This 500HP Twin Screamer Vauxhall Corsa is beyond nuts!

CLASSIC ONE: Crazy guys put a V8 engine into a Renault Twingo

THE QUICKEST MK2 VW GOLF IN THE WORLD – TTK PERFORMANCE

Lamborghini Performante LOSES control and CRASHES into a Tree!