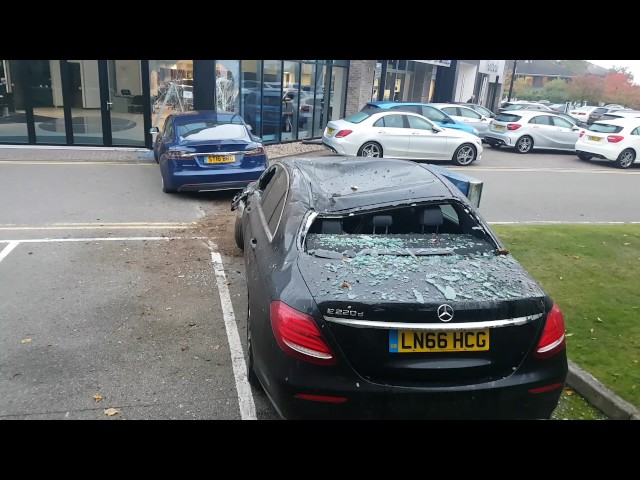 Ome of the craziest crashes with a Tesla Model S,period! The Model S flew 30 feet and landed on top of an E-Class before smashing into the showroom.

This is the aftermath of a bizarre crash in which a Tesla Model S vaulted the hedge outside a Mercedes dealership and crash landed onto an E Class before smashing into the building.

The crash occurred last week at Mercedes-Benz of Hertford, north of London. It seems the Tesla somehow lost control on the Foxholes roundabout, crossed the roadside verge, and launched over the shrubbery-covered rampart that separates the dealer’s lot from the road.

The Tesla flew some 30-plus feet (10-plus meters) and landed on top of the E Class, which was parked on the other side of the hedge. It then smashed into the corner of the dealer’s Smart showroom, severely damaging one of the uprights.

“That’s epic,” the cameraman says when he manages to stop laughing in total disbelief. You can only imagine what the dealer’s staff thought when they heard an almighty crash and came outside to find this.

Fortunately, it seems the Tesla’s occupants were okay -the Model S was awarded one of the highest NHTSA safety ratings ever recorded. And, it must be said, the E Class stood up to the impact incredibly well, too.

4608 pounds (2,090 kilograms) fell on it from height with speed and the side rails only seem to be showing cosmetic damage. It’s still totaled, though.

There’s no indication yet as to the cause of the crash. Some Youtube commenters suggested the driver was drunk, but there’s no evidence to that effect.

Perhaps the driver was unfamiliar with the car, or inattentive, and was caught out by the responsiveness of its electric motor. Or maybe it was just a moment of complete, total, and utter brain fade.

Incidentally, the E Class bears the UK’s latest ’66’ license plate, which has only been issued since September. So it was either a dealer demonstrator or, worse, awaiting collection by its new owner.

Worlds ONLY Tesla Swapped Audi! How Did He do it?