We all have seen the white VW Lupo with 2 V(R)6 engines. But that one had just 2 V6 engines. Here we got another crazy project, this one has actually two W12 Engines from a VW Phaeton fitted in a Lupo! The Lupo was born as a 1.2L TDI 3L with just 61HP! The W12 engines were placed horizontally and he put a 2.0TDI gearbox on with an adapter plate he made himself.

The reason why? We don’t know but it sure looks impressive! This Lupo has a total of 900HP! Watch the video below to see the beast being build. The same guy also built the Lupo V8 and a Lupo 2.0 TDI! 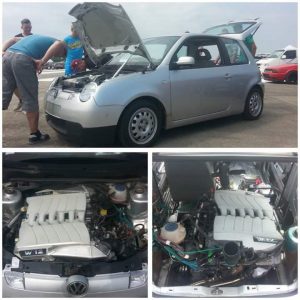 The world Famous MK1 Golf that overtook the Porsche and Nissan!

Fiat 600 Flips Over and Crashes At Santa Pod Raceway